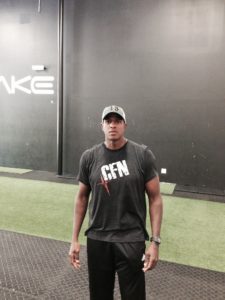 Hey Northlake, check out this month’s member of the month. Congrats Mario.

1: Where are you from originally?

2. What is your favorite WOD/movement?

I would have to say the rowing machine and slam balls. I’m pretty decent at those movements.

3. What is your least favorite WOD/ Movement?

I can list quite a few but at the top would be burbpees .

4. What were you doing before CrossFit? How did you hear about CrossFit and/ CrossFit Northlake?

I was an avid runner before I tore my meniscus in my right leg. I would constantly hear about crossfit at work but thought it wasn’t safe and would lead to injury. But after hearing it from many coworkers of mine and then my surgeon told me to try it I did. I made appointments with three boxes in my area the first two didn’t really appeal to me. I spoke with a coworker and he told me he was going to a new box called crossfit Northlake. I met with Jason and told him that I was six weeks out of surgery with only a month of rehab. He told me not to worry that every movement could be scaled and I would still get a workout. And he was absolutely right.

5. What other sports or activities do you participate in as a family besides CrossFit?

We are big football fans in my house plus with a 17 month old in the house he is a sport of his own.

6. How many times per week do you CrossFit?

As many times as I can go! I’m serious; I’ve gone six days a week sometimes.

7. What is your athletic background?

8. Give us some insight as to your thoughts after your first workout at CrossFit Northlake.

I felt like I had been punched in the mouth! I felt defeated, but at the same time encouraged to keep working and to keep coming back.

9. Do you have any special or favorite CrossFit Northlake memories/moments?

One memory I have is the first time I made it up the rope. I was so tired of doing wall climbs my shoulders were fried and I told myself if I climb the rope I won’t have to do another wall climb! And the other memory was my first Rx workout.

10. What advice would you give to a newbie or someone just joining CrossFit Northlake?

Listen to the coaches! Crossfit Northlake has some of the best coaches around. They have pushed me to new levels of fitness.

11. What is your eating style?

Totally revamped, I finally embraced the Paleo lifestyle I would like to think when I am on my game its 80/20 but now I’m a strong 55/45 …

12. What kind of results have you seen since starting at CrossFit Northlake

I am a City of Charlotte Firefighter.

14. What drive you to be an active family?

I want to be in shape for the citizens that I help and the people that I love.

Ready to change your life? Come see what we are al

It was good to get outside for a hike this weekend

@pinnaclemassage is almost up and running. Stay tu

I’ve waited months to post this. You don’t kno


Error: API requests are being delayed for this account. New posts will not be retrieved.