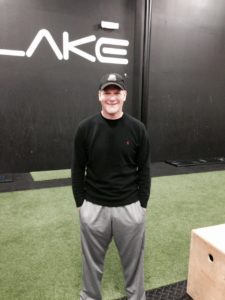 Marty Snider is our newest Member of the Month at CrossFit Northlake.  Marty joined earlier this year and has never looked back.  We are so inspired by his motivation and the results that he has gotten.  Keep up the great work Marty!

1: Where are you from originally?

2. What is your favorite WOD/movement?

The ones when Jason is not looking…ha!  Alright, if I have to pick one I’d have to say pull ups.  When I joined CFN, I told Jason my goal was to do one pull up…just one.  I’d never done one in my life.  I’m still using a band for regular pull ups, and I can do them all day long, but I can almost do a reverse grip pull up on my own.  That’s huge for a former fat guy like me.

3. What is your least favorite WOD/ Movement?

The ones where Jason is looking!  And pistols.

4. What were you doing before CrossFit? How did you hear about CrossFit and/ CrossFit Northlake?

Sitting on the couch eating pizza.  As you can tell, lots of sarcasm in my answers.  Seriously, I was a Y guy.  I would “run” a mile on the elliptical then hit the steam room after my rigorous work out.

I have my buddy Chris Hackett to thank for introducing me to CFN.  It’s truly changed my life.  Although I really thought I was going to throw up my first day…I truly look forward to getting to class every day now.   One of my first priorities in scheduling out my day is what CFN class can I make it to?

5. What other sports or activities do you participate in as a family besides CrossFit?

Our family sports consist of watching our kids participate in sports.  My oldest son Myatt (who also goes to CFN) is a college student and a NASCAR driver.  He is in NASCAR’s Late Model division, the Whelen All-American Series.  So I spend A LOT of time at his races.  Our daughter Jillian is a swimmer at South Lake Christian.  And our youngest son Emmitt is a year round baseball player.  So not much time in there for family sports.

6. How many times per week do you CrossFit?

I like to come 5 times a week, but JB keeps saying I need a day off.  So I am trying to make it 4 days a week.  I would love to follow the rule of working out Monday, Tuesday, Wednesday, off on Thursday, work out Friday and Saturday and take Sunday off, but I just can’t make myself give up a Saturday to work out yet.  I get so few of them at home as it is!

7. What is your athletic background?

Well Jason said I had to keep this to 10 pages so I can’t list everything!  Seriously, I was a pretty athletic kid.  We played every sport possible until sports became serious in high school.  I played basketball all the way through high school.  Never was allowed to play football in high school because our basketball coach would not allow anyone on his team to play.  Still wish I would have just done it anyway to see if he really would have kicked me off the team.

Other than basketball, I was a swimmer and a golfer.  Yes, golfers have athletic talents as well…and feelings.

8. Give us some insight as to your thoughts after your first workout at CrossFit Northlake.

I thought I was either going to die or kill Chris Hackett for bringing me.  One of the two was going to happen.  Fortunately, I just came home and collapsed from exhaustion.

9. Do you have any special or favorite CrossFit Northlake memories/moments?

No doubt winning Emma’s Paleo challenge.  I will never forget, I had been working out about two months and hadn’t lost an ounce of weight….but I was working my butt off!  Then Jason said to me one day out of the blue, “you ready to talk about your diet?”  I told him, “what’s wrong with four chai tea latte’s a day?”  But he told me, “just give me 30 days hard core Paleo and I promise you will see amazing results.”

And he was right, when I started fairly strict Paleo the weight started to fall off right away.  I dropped 20 pounds over the 30 days of the challenge.  I had a lot of people ask me what I did during Paleo.  Right or wrong I made just one recipe.  I pretty much just ate grilled chicken or ground turkey for my protein.  Then for my starches I would have either broccoli, asparagus or brussell sprouts.   I also worked in a lot of fruit and tons of water.  That meant I had to cook a lot and buy about nine boxes of Ziplock bags to portion out all of my food.  But I diligently did it, each Sunday.

My one secret indulgence during Paleo was chocolate almond milk, great source of protein.  The one thing I had to give up that I hated was red wine.  Love me some red wine.  I missed my friend during Paleo.

10. What advice would you give to a newbie or someone just joining CrossFit Northlake?

Stick with it.  It’s hard at first but it’s worth it.  There’s always a modification for every exercise…so anyone can do it.  Never allow yourself to feel intimidated because everyone is so encouraging, they all want to see you succeed, it’s just the CrossFit culture.  Or the cult as my wife says.

11. What is your eating style?

Now I try to stick to Paleo 80% of the time.  I found I really did not miss the bread during strict Paleo, so I am trying to keep that out.  I also changed my Starbucks drink from a Chai Latte to a tea bag Chai Tea, it tastes different but you get used to it…it’s actually more authentic.  Now instead of sugar that is already mixed into the Chai Latte syrup, I am using Stevia in my Chai.  I think cutting out that sugar has helped tremendously.  I really wasn’t kidding earlier about four a day before I started Paleo!

12. What kind of results have you seen since starting at CrossFit Northlake

Down 25 pounds and counting and amazingly ripped arms…well not yet, but I am working on that part.  I do have well defined shoulders for the first time in my life.

I probably have one of the more unique jobs at CFN, I am a sports broadcaster.  I am an on air reporter for NBC and Turner Sports.  I cover the NBA, NASCAR, Indy Car, College Basketball and all kinds of crazy other sports like rugby 7’s.  Great job, but it means I travel way too much…which makes family time, cross fit and Paleo all hard to keep up with.

14. What drive you to be an active family?

My main motivation for wanting to come to CFN was not to look good.  My main motivation was to get healthy.  Last year, after months of running around the country and getting between 3-4 hours of sleep per night, I wound up in the hospital.  It was just a viral infection and exhaustion but after spending a few days in the clink as I started to call it, my doctor told me it was time to make some changes.  After a few less than stellar blood test, I decided it was time for me to find a serious workout program.  Enter Jason and Amy into my life and 25 pounds later, I am on the right track.